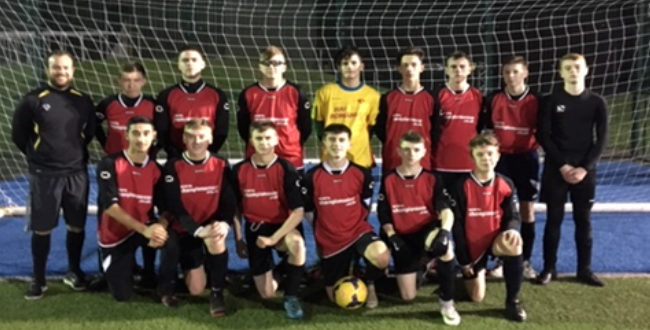 An excellent game of football from two schools who represented their respective schools with maturity and pride. The game started slowly for Woodfields and STW took full advantage taking an early lead after some defensive confusion in the box. Woodfields began to grow into the game towards the end of the first half and Ahmet Tasci converted an excellent through ball from midfield, lobbing the keeper moving the Half time score to 1-1. During the second half both sets of players played some excellent football resulting in some fantastic saves being made by both keepers and Woodfields hitting the post three times in quick succession. It was to be STW who dealt a significant blow to Woodfields 7 minutes from time when they again took the lead to make it 2-1. With time running out Woodfields looked destined to fall at the final hurdle, but the attitude of the Woodfields players ensured that this wasn’t going to be straight forward for STW, with 2 minutes left Ryan Shepard picked the ball up on the right wing and drove at the STW defence finishing with an excellent strike into the bottom corner tying the game up at 2-2 which took us into extra time.

At this point both sets of players were looking fatigued it was going to go to the team that could dig the deepest, early in the 1st half of extra time STW were awarded a penalty after a clumsy foul in the box from some tired defending, fortunately for Woodfields Andre made himself look big and STW pulled the penalty wide, a let off for Woodfields but could they capitalise. With one minute to go at the end of the first half of extra time Ethan Thorpe received the ball inside the STW 18 yard box and converted a one touch turn and volley into the top corner of the STW goal sending the players and crowd in raptures. From this point it was down to Woodfields to protect what they had earnt, eventually the Woodfields team secured a superb and memorable 3-2 victory, progressing to the final of the Doncaster Schools cup.
Congratulations and well played.

All 2019 Examination Certificates are now available to collect from the Academy main reception. If …